The land of “Pura Vida” 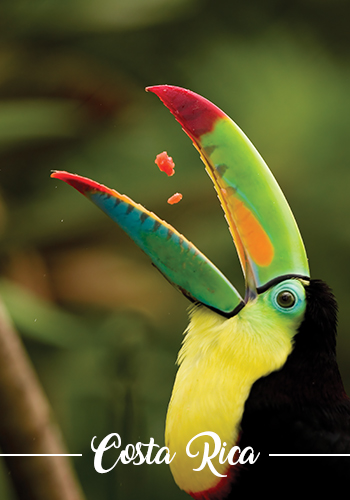 “Pura vida” (pure life) is more than just a catchy slogan for the national tourism agency – it really is the way that Costa Ricans view their country and their lifestyle. It also describes a fierce pride in a country that values education and families, chooses to have no military, protects their natural surroundings and welcomes foreigners with open arms.

Costa Rica is a middle-income, developing country with a strong democratic tradition. Tourist facilities are generally extensive and adequate. While English is a second language for many Costa Ricans in tourist areas. Costa Rica is a tropical country located between two oceans with a complex geography that gives origin to a variety of climatic conditions and creates a variety of life zones that go from the dry tropical forest to the moorland. In general, temperatures fluctuate between 14 and 22 degrees Centigrade. Even though there are clearly defined seasons, the climate in each region is fairly stable the whole year long with slight changes depending on whether it is “Summer” (dry season) or “Winter” (rainy season). The “Summer” generally runs from December to April and the “Winter” goes from May through November.

Costa Rica is an extraordinary refuge for life, full of natural surprises and while covering an area of 51.100 km, which represents only a 0.03 percent of the surface of the planet, it houses around 5 percent of the entire biodiversity of the world. The plant formations vary depending on altitude of the ground. In the tropical forest on the coastal areas of the northeast and south, rainfall is more abundant and the trees and vegetation take on large dimensions. In the mountainous region of the Atlantic, at an elevation of 800 to 1500 meters above sea level, the vegetation is characteristic of a rainforest. On the Central Plateau, it is dry and fewer trees grow there, but there is a proliferation of grass and herbaceous plants. In the higher elevations, one finds the mixed tropical forest. Costa Rica is extraordinarily blessed with fauna. The numbers and diversity of animal species found here is incredible. Depending on where you go, you have the possibility of observing Quetzals, 5 or 6 species de toucans, tapirs, deer, ant eaters, sloths, monkeys, white nosed coatis, otters, opossums, jaguars, ocelots, pumas, mountain lions, macaws and many more.

We’d love to hear from you!

Get in touch with us